A common reason motorists are stopped for drunk driving in Brighton is as a result of a sobriety checkpoint, sometimes referred to as roadblocks. Roadblocks are organized so that every car traveling on a designated road will be stopped. There are many roadblocks on Storrow Drive in Brighton, as they are conducted routinely in that area by the Massachusetts State Police.

Regardless of how your OUI arrest arose, whether through a roadblock or routine motorist vehicle stop, it is important to hire an OUI Lawyer so that you understand your defenses to the case and what evidence may come in at trial. The Massachusetts State Police aggressively patrol Storrow Drive; I have seen state troopers allege lane violations which are actually caused by the nature of the road in that area.

Many who read their police report assume that everything in the police report will be said at trial. This is not the case. Motion hearings are a step in the process of fighting an OUI charge to attempt to exclude evidence from trial. There are other procedures prior to trial to limit what evidence can be heard by the jury. 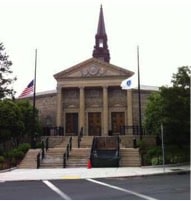 The Brighton District Court has two sessions: a first session and a trial session. If you have a trial at the Brighton Court, it will be held in the second session court room.

Michael DelSignore draws on years of experience to effectively represent clients in the Brighton District Court. Attorney DelSignore represents clients facing all types of misdemeanor and felony charges, including drunk driving (DUI) and other serious traffic charges. He makes an effort to protect his clients’ driving privileges and he aggressively defends them against drunk driving and operating under the influence charges.

In this case, the client was arrested by a State Trooper who frequently arrests people for OUI in Brighton. The officer alleged the client was speeding, and weaving through traffic. Attorney DelSignore was able to have the breath test excluded from evidence at trial, and the client was ultimately found not guilty.

If you were stopped at a roadblock, you may have questions about this and how it might impact your case. You can read more about roadblocks and the many defenses available to your case here.

If you are wondering whether or not you should hire an attorney to represent you, read more about the extensive experience Attorney DelSignore has defending clients who are charged with operating under the influence on his Avvo web page here.