In Massachusetts, a Clerk Magistrate hearing or a show cause hearing can be scheduled in lieu of a formal arrest. A clerk magistrate hearing is a hearing given when an individual attempts to take out a private criminal complaint against another person or when the police officer does not witness the criminal conduct that gives rise to the charge or does not make an arrest.

Common charges heard by the clerk magistrate include: How the hearing will proceed

The hearing itself is held before Clerk Magistrate in that District Court. The hearings are often held in an office and are informal. Courts like Attleboro, Brockton, Fall River, Taunton, Concord and Wrentham, typically have their clerk magistrate hearings in a private office like room. Some courts use the courtroom, like Dedham, Quincy and Stoughton, members of the public are not allowed to watch these hearings.

What happens at a Clerk Magistrate Hearing?

The party that has accused you of committing a crime, either the independent party who filed the claim or a representative from the police department who is requesting that the complaint issue, will appear to describe their version of the incident.

What type of defense should you provide at a Clerk Magistrate hearing?

The best way to get a successful outcome, meaning have the clerk not issue the complaint, is to do something proactive before the hearing to show the clerk, you have addressed the problem that brought you to court. This strategy does not always work but is highly effective. At DelSignore Law, we have had clerks not issue complaints on OUI cases when our clients have received alcohol treatment.

If your offense is alcohol related, get some alcohol treatment; if the clerk magistrate hearing is about a drug offense, enroll in drug counseling; if it is an assault and battery offense, obtain counseling or attend an anger management course.

What is the standard at the Clerk Magistrate Hearing?

The standard at the hearing is probable cause. Probable cause is a very low standard of proof. In most cases, technically the clerk will have enough evidence to issue the complaint. However, some clerks may be willing to take a more practical approach, meaning that they may resolve the case without formally issuing the complaint. For example the clerk may be willing to consider alternatives such as:

Recent Successes What happens if the complaint is issued? 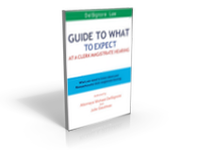 If the clerk does issue the charge your case will be sent to the district attorney’s office and you will face a formal arraignment in the district court. This means that you will have a criminal record.

If your case is scheduled for a magistrate hearing, you should hire an experienced Massachusetts criminal defense lawyer immediately.

If you have any questions about a criminal magistrate hearing in Massachusetts feel free to call or send an email through this website. You can reach me by call or text at 781-686-5924.