A trafficking of marijuana charge occurs when an individual possesses marijuana with the intent to distribute and the amount is sufficiently great that it rises to the level of trafficking rather than distribution.

What is the difference between a trafficking charge and a distribution charge?

The difference between a trafficking and distribution charge is essentially the amount of marijuana that is possessed and believed to be possessed with the intent to distribute. Simply stated, what differentiates a charge of trafficking from one of distribution is ultimately the quantity.

Even if the defendant claims that the seized drugs were for personal use, the ultimate deciding factor will be the weight of the drugs Commonwealth v. Luis A. Gonzalez (2006). As a defendant may live in a dwelling with other people, it is important for the defense to determine exactly how much of the drug seized actually belongs to the defendant as opposed to co-defendants or anyone else who had access to the home.

Outlined below are the consequences for trafficking marijuana, cocaine and/or opiates. 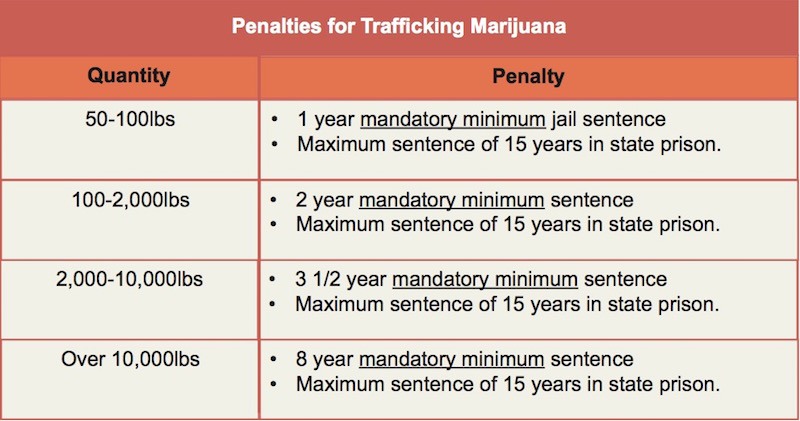 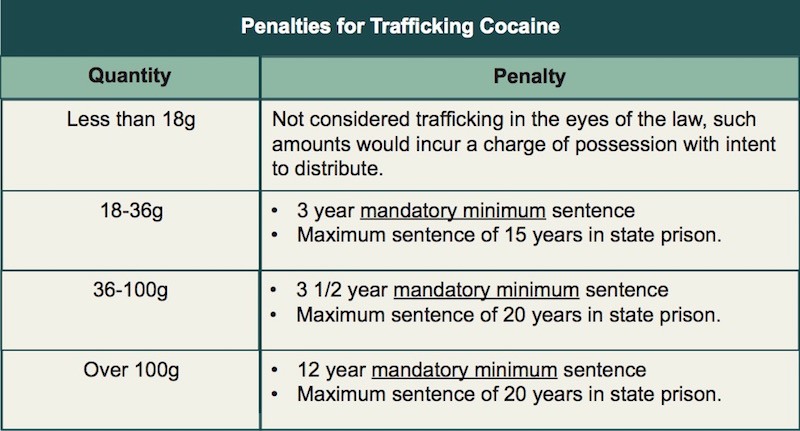 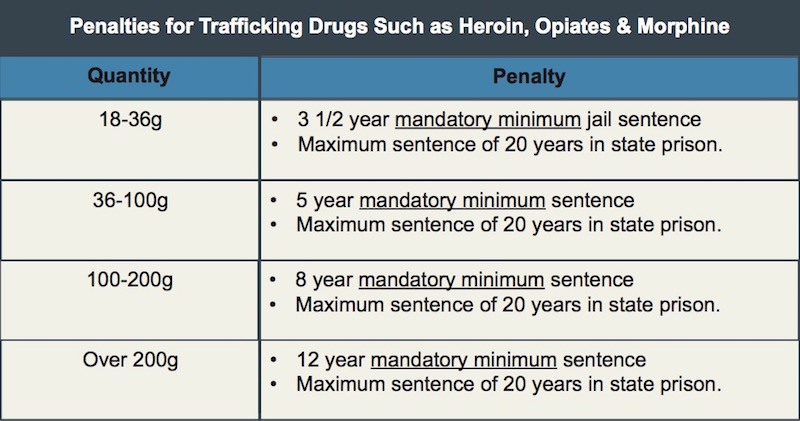 What are some of the defenses available to me?

All of the defenses to a charge of intent to distribute, also apply to a trafficking case. To learn more about constitutional defenses, see our pages:

In regards to defenses specifically related to trafficking, because the amount is a critical element of the case and is the only element that essentially differentiates it from possession with intent to distribute, the defense strategy must focus on demonstrating that the possession falls below the ranges which define the sentence severity.

In some cases, through plea negotiation, the district attorney may agree to amend a charge down to a lesser level. For example, if you possessed 50 grams, it is possible a defense attorney could persuade the Attorney General to amend it to an offense level with a lower mandatory minimum sentence.

If the case is going to be fought in court, a key part of the defense strategy involves the defense attorney filing a motion to suppress evidence; this would potentially affect what evidence is allowed into trial, including the amount of drugs on your person at the time of the arrest.

If it is clear that the defendant possessed a large amount of drugs, whether heroin, marijuana or cocaine, your defense is going to rely on a motion to suppress which could show that the search was invalid, the informant was unreliable, or that the police should never have searched your home.

You can learn more about defenses available to your case and search and seizure issues commonly found in drug cases on our website today.

The attorneys at DelSignore Law handle drug charges throughout Massachusetts and can be reached directly at 781-686-5924 if you have any questions about your case.
Contact Us
Search
Criminal Defense
Personal Injury and Accidents
Client Reviews
★★★★★
Michael was very professional and explained the process clearly and told us to be patient. After one year the charges got dismissed in the trial. Excellent knowledge of the court systems in the area of Boston. Would highly recommend him Ashwani
★★★★★
A careless decision on my part left me facing charges which would have severely hampered my ability to stay employed and support myself. But attorney DelSignore's skillful analysis and challenging of the evidence against me resulted in a conviction on a lesser charge. Now I'll be able to go on with my life, having learned a lesson I'll never forget. Thank you, Michael. Scott
★★★★★
Mike stuck with my case for 3.5 years and always kept me informed regarding the status. Ultimately, because of his due diligence, we ended up with an OUI not guilty verdict. This case could have gone many ways but his thorough review of the case and exceptional preparedness for trial ultimately drove a positive outcome. Thank you Mike! David
★★★★★
Michael DelSignore did an amazing job with my case! He was always available to answer any questions I had and helped walked me through the entire process. I could not have done it without them! I highly recommend choosing this law firm to deal with your legal needs, you will not be dissatisfied. Ashley
★★★★★
I cannot express the gratitude towards Michael for his amazing work and help. It was a very stressful event and they certainly put me at as much ease as possible. From start to finish it took 14 months and all the way through they were both very engaged with me. Today was worth the wait, Michael was great in court and I was rightfully found not guilty. I would recommend Michael over and over again. Claire
View More
Submit a Law Firm Client Review