Like any criminal charge, a domestic assault and batter will go through the standard stages of the court process, as outlined below.

The arraignment is the first court date.

While many expect the case to be immediately dismissed, this rarely happens
even if the alleged victim does not wish the case to go forward or did not want to
see you get arrested.
2. Pretrial Conference

Following the arraignment, the pretrial conference stage is an attempt to explore weaknesses in the Commonwealth’s case and find a way to resolve the case short of a trial.

Some types of resolution may include: 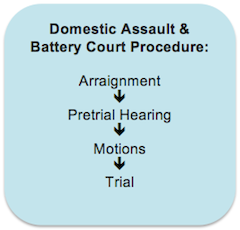 During the Pretrial Conference, the Court will explore Privileges such as the Victim’s 5th Amendment Privilege or any Marital Privilege that may prevent the Commonwealth from a successful prosecution.

What if the victim does not testify?

In many Massachusetts domestic assault and battery charges, the victim does not wish to testify against the defendant.

Even though you may believe that the case has no merit, the alleged victim does not wish to testify, you should not expect the case to be dismissed immediately.

The Commonwealth may still try to prove the case even without the testimony of the alleged victim.

When domestic assault charges are brought in Massachusetts, the charges are brought by the State and only the prosecutor has the discretion as to whether a case is dismissed or not. A victim in a case has no authority to drop criminal charges, but can only express an opinion to the district attorney as to how the case should be handled.

If the case cannot be resolved, the case will be scheduled for trial, which will typically occur before a jury but can also be before a judge.

Others found the following web pages helpful for further information:

Want More Information? Download Attorney DelSignore's Free Book on the Process for Handling a Domestic Assault and Battery
Publication in the Massachusetts Lawyers Weekly on Domestic Assault and Battery cases CLICK HERE
Criminal Defense
Personal Injury and Accidents
Client Reviews
★★★★★
Michael was very professional and explained the process clearly and told us to be patient. After one year the charges got dismissed in the trial. Excellent knowledge of the court systems in the area of Boston. Would highly recommend him Ashwani
★★★★★
A careless decision on my part left me facing charges which would have severely hampered my ability to stay employed and support myself. But attorney DelSignore's skillful analysis and challenging of the evidence against me resulted in a conviction on a lesser charge. Now I'll be able to go on with my life, having learned a lesson I'll never forget. Thank you, Michael. Scott
★★★★★
Mike stuck with my case for 3.5 years and always kept me informed regarding the status. Ultimately, because of his due diligence, we ended up with an OUI not guilty verdict. This case could have gone many ways but his thorough review of the case and exceptional preparedness for trial ultimately drove a positive outcome. Thank you Mike! David
★★★★★
Michael DelSignore did an amazing job with my case! He was always available to answer any questions I had and helped walked me through the entire process. I could not have done it without them! I highly recommend choosing this law firm to deal with your legal needs, you will not be dissatisfied. Ashley
★★★★★
I cannot express the gratitude towards Michael for his amazing work and help. It was a very stressful event and they certainly put me at as much ease as possible. From start to finish it took 14 months and all the way through they were both very engaged with me. Today was worth the wait, Michael was great in court and I was rightfully found not guilty. I would recommend Michael over and over again. Claire
View More
Submit a Law Firm Client Review