Many lawyers despite handling criminal defense work for years, may not have much experience handling trials. That can be surprising. But there is a vast variety in how lawyers handle even the same types of cases.

A lawyers ability to successfully defend a client before a juror depends on a number of factors:

What will the First Court date be like when charged with a Fourth Offense OUI?

Here are some of the issues that may come up at the 1st Court date on a Fourth Offense or greater OUI.

When you are charged with a Fourth Offense OUI, your only hope to avoid jail is to win at trial. For this type of case, your freedom is on the line and you should hire someone that has experience handling trials in front of jurors. It would be rare to have a bench trial or trial before a judge on a Fourth Offense OUI. That is because the judge will know it is your 4th Offense. Even the most favorable judge is likely to consider that against you. However, the jury will not know what number of offense your a facing. In terms of the trial, there is no difference in how it is presented based on the offense level. The difference is that a 4th Offense will be a priority on the court calendar. When you are scheduled for trial on a fourth offense OUI, the Court is likely to consider that case the most important case of the day, except in the unusual circumstances where there is an equally serious case on.

Given these serious consequences and the different treatment the charge will receive in Court, you need to hire a lawyer whose practice is dedicated to defending OUI cases to ensure the best chance of success at trial.

Things to know if you are charged with a Fourth Offense DUI: 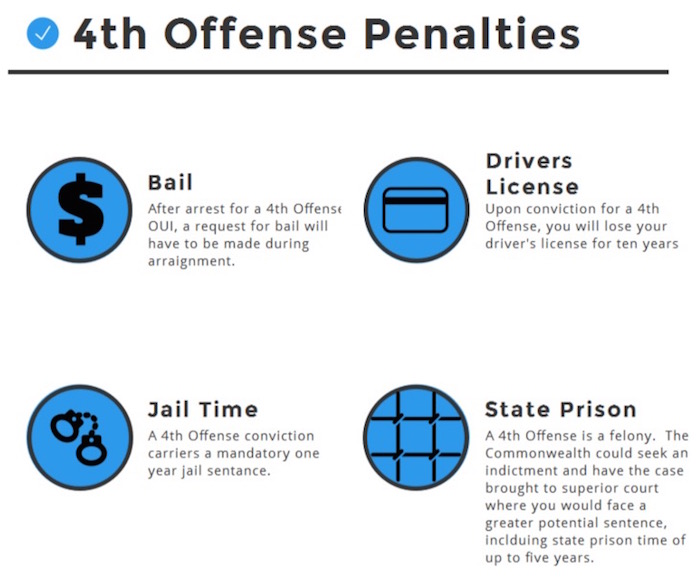 Bail and Dangerousness Hearing for 4thOffense:

When you are charged with a Fourth Offense Massachusetts DUI, it likely that the Commonwealth will request a dangerousness hearing to hold you without bail for up to 120 days.

While in many cases the request for a dangerousness hearing will be denied, it does require you to hire an experienced Massachusetts drunk driving defense lawyer to contest the require for detention on the dangerousness hearing motion. In some cases, the judge will allow for a detention of anywhere from 3 to 7 days prior to the hearing being scheduled.

If the request is granted, you can be held for up to 120 days unless the request is overturned on appeal to the superior court. In most cases, a 4 th Offense will result in a cash bail and conditions of release, such as blowing into a breath test machine to prove you are not driving three or four times per day even if the dangerousness request is denied.

As a dangerousness hearing could result in jail time, you should familiarize yourself with these hearings; feel free to read more about them on our website here.

To read more about Melanie’s Law and how it could have an impact on you if found guilty of a fourth offense OUI, visit our website today.

In this case, my client was arrested and charged with an OUI 4th after a Reading police officer alleged that he failed the nine-step walk and turn field sobriety test, was unsteady on his feet during the encounter, and had slurred speech. My client owned a business and has two children currently enrolled in college. With a lot on the line for the client, Attorney DelSignore eagerly got to work; he obtained video surveillance from a car dealership which showed the defendant, and was able to have the clients’ breath test results excluded from trial. At trial, Attorney DelSignore used the video evidence to show the client was not unsteady on his feet and the client was ultimately found not guilty, avoiding a mandatory one year jail sentence.

4th Offense OUI Found NOT GUILTY After Trial in Wrentham

In this case, the client was charged with a 4th offense OUI by the Plainville Police Department and was alleged to have failed field sobriety tests and told the officer that they consumed three glasses of wine earlier in the night. My client opted to take the breath test which yielded a .14 result. After a motion hearing, the breath test was excluded from evidence at trial. Attorney DelSignore argued to the jury that the client was nervous when performing the field sobriety tests and was not driving erratically as the police initially alleged. After a jury trial the client was found not guilty

Attorney DelSignore’s trial experience and skills in the courtroom would give you the best chance for a successful outcome in Court. You can call or text 781-686-5924 to speak to him about your case.