The Nine Step Walk and Turn Field Sobriety test is a field sobriety test that many motorists perform extremely well on, despite the officer's conclusion that the test was failed. The exercise is extremely difficult because the exercise has eight instructions that are unfamiliar to most people, the officer typically will rush through the instructions making it difficult to understand what the officer is looking for on the test.

The reason that test can be helpful for a motorist is because there are many different clues that the officer is looking for and ways to show that a motorist had good balance and or mental ability in performing the test. Even if the test was not performed perfectly according to the officer, an experienced Massachusetts DUI lawyer can argue that a motorist substantially performed the test and that the test shows good mental ability and balance necessary for safe driving. 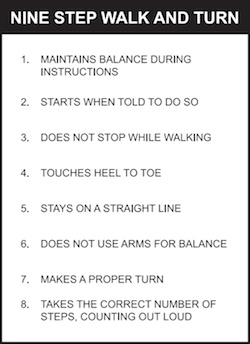 Failure to maintain heel to toe: The nine step walk and turn field sobriety tests requires the motorist to take nine steps out, maintaining heel to toe. Often, an officer’s police report will state that the motorist did not maintain heel to toe. However, the police training manual indicates that maintaining heel to toe is only an indication if there is greater than a two inch gap. Typically, the police report will not indicate how far apart the motorist missed heel to toe. This is an example of unfair scoring on the field sobriety tests, where the test has specific clues while the officer scores the test generally without regard to the details learned in the police training.