Driving Under the Influence of Marijuana and OUI Drugs

If a police officer stops you in Massachusetts and smells marijuana, there is a good chance the officer may arrest you for driving under the influence of marijuana and charge you with OUI drugs; this is a very common way officers charge a defendant with an OUI marijuana charge. There are some new defenses to a charge of OUI drugs involving marijuana based on the recent changes to the law involving the possession of marijuana.

An OUI Marijuana charge in Massachusetts is a very winnable case, because typically the Commonwealth will have no evidence as to how much you smoked, when you smoked marijuana and will lack an expert to say what impact any marijuana intake would have on your ability to drive.

How does the decriminalization of under an ounce of marijuana impact my case?

As a Massachusetts OUI Lawyer, we can request a hearing challenging the legal basis for the officer to order you out of the car and request that you perform field sobriety tests. If this motion is successful, the case will most likely be dismissed.

Attorney DelSignore was quoted in Lawyers Weekly for his work on the Commonwealth v. Gerhardt case. See a snippet from the article below: 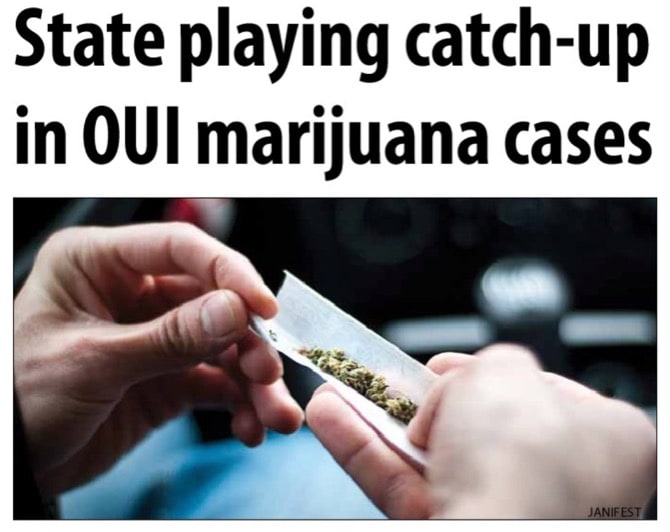 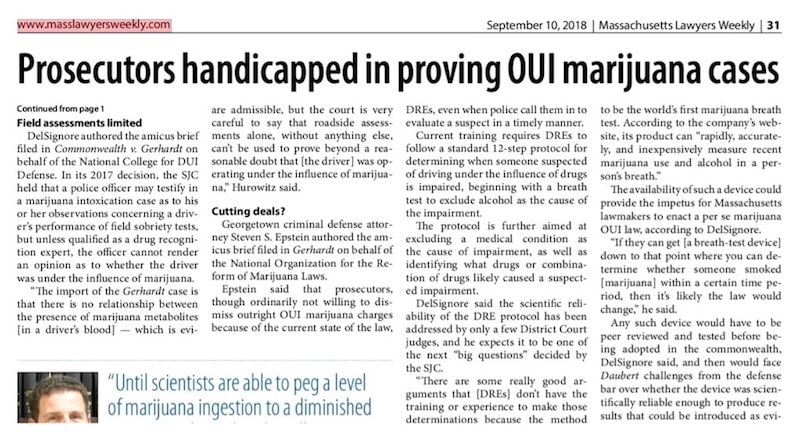 What to do if arrested for OUI Marijuana or OUI Drugs in Massachusetts?

There are two main ways to tackle an OUI marijuana charge in a Massachusetts court:

The first thing you should do is understand your legal defenses. An OUI lawyer may be able to make Constitutional challenges in your case. An officer who makes a stop based on a traffic infraction and smells an odor of marijuana may not be permitted to immediately order you from the car. One key issue is whether the officer claims the odor was a lingering odor or freshly burnt marijuana. If the officer claims that it was unburnt marijuana, the officer may not be able to issue an exit order based on recent case law from the Massachusetts Supreme Judicial Court.

If the officer claims that the odor is of freshly burnt marijuana, this raises a closer question but still may make the exit order unlawful.

The officer would likely need credible evidence of observations to substantiate a suspicion that you were operating under the influence of marijuana. At a motion hearing, Attorney DelSignore will be permitted to cross examine the officer as to the basis of these observations.

Read what our clients have to say about us:

“Attorney DelSignore is professional and committed to his work”

“Michael is a professional, experienced attorney who was always prepared for whatever twists and turns my sister's case seemed to take. He was extremely skilled in the court room abd was able to change his strategy based on the situation to ensure the best outcome possible for her. Having to take a case to trial is never an easy process, but he gave excellent advice and we got a very positive outcome in the end. My sister is a professional, and if found guilty of a criminal offense, would have suffered greatly. Thank you Attorney DelSignore for all of your hard work!”

Confronting the officer’s opinion that you were under the influence:

Even if the motion is unsuccessful, it will allow you to hear the evidence and better prepare for trial. A charge of OUI marijuana is difficult for the government to prove since there is often no blood work showing the level of marijuana in your system. While the officer likely gave you field sobriety tests, these tests were designed for alcohol and there is no data or evidence showing that they also relate to impairment by marijuana.

Status of your license

By contacting DelSignore Law today, you can set up a free, no-obligation consultation of your OUI drugs case. We have office locations located throughout Massachusetts and are happy to meet with you today.