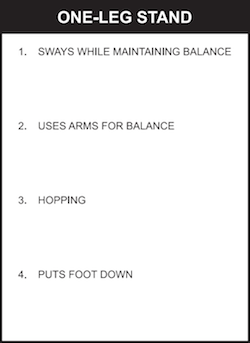 Many wonder how they can be charged with OUI in Massachusetts based on not being able to stand on one leg, when few can hold their foot up for 30 seconds even if consuming no alcohol at all.

The one leg stand is probably the most difficult field sobriety test. The test requires a motorist to hold one foot, six inches from the ground while counting to thirty. Essentially, the test is a test of physical fitness and abdominal strength as a motorist with a greater level of physical fitness will be more likely to succeed while taking this test. This is evident by the fact that many exercises techniques have a person elevate their foot to engage the abdominal muscles.

Based on the police training manual, the one leg stand test excludes individuals from being candidates for the test based on physical condition.

Attacking the one leg stand at trial: Many jurors will understand that it is unfair to have a carpenter, plumber or mechanic, who has worked a physically demanding job for years, suffering aches and pains, to take the same test as a young college student. The same test is given to all motorists regardless of physical and medical limitations. Officers do not account for nervousness or physical limitation when scoring the test; however, these facts can be stressed to the jury at trial to undermine the reliability of the test.

An officer looks for the following clues when scoring the one leg stand:

According to the police scoring, the presence of two clues denotes a failure on the test. Many jurors would likely find that a motorist passed the test even if the foot is not held up for 30 seconds. In cases, where a motorist cannot hold the foot up for more than a one or two seconds, an experienced Massachusetts OUI lawyer will attack the test by undermining its reliability and by stressing to the jury other places where the motorist demonstrated good balance.

These techniques severe to show that the one leg stand has no relationship to whether someone is under the influence of alcohol. As an experienced Massachusetts OUI attorney, attacking the reliability of field sobriety tests is an important part of winning at trial.

You can call Attorney DelSignore to schedule an appointment and learn more about ways to challenge the reliability of these tests by calling 781-686-5924 or 508-455-4755.