If you are arrested for OUI drugs in Massachusetts, in some cases, a police officer trained as a DRE or drug recognition expert will undertake an evaluation of you, similar to field sobriety tests, in order to form an opinion that you were operating under the influence of drugs.

The difference between the DRE and field sobriety tests is that the DRE exam is longer and the officer is essentially making a medical assessment. Since officers do not have this training, an OUI Lawyer may be able to get this evidence excluded during your trial.

Did you know?Nervousness can impact your ability to perform well on the field sobriety tests.

The below list details the 12 steps of a DRE exam; if the officer fails to complete a step or skips a step, an argument can be made to exclude the test from evidence in Court. 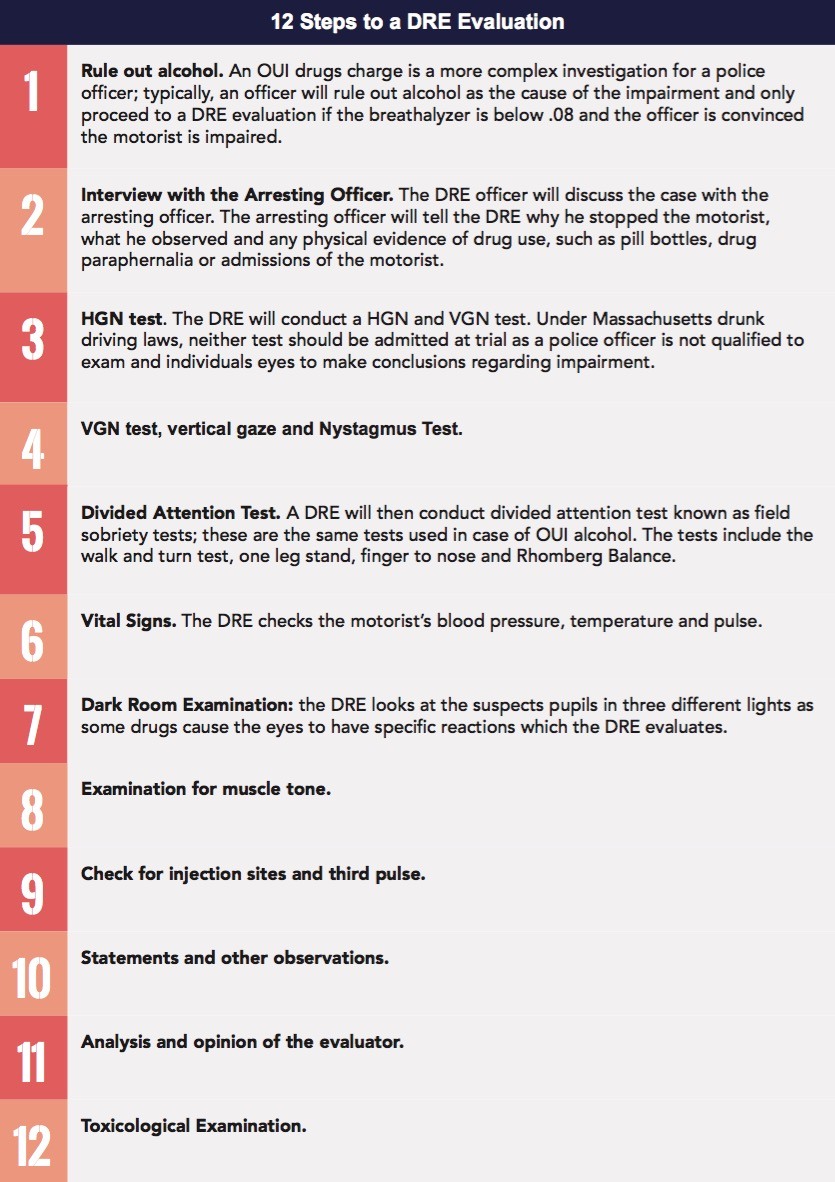 There are numerous ways to challenge the reliability of any opinion testimony from a DRE exam. The 12 steps demonstrate that a police officer is essentially conducting a medical evaluation for which the qualifications and training of the officer can be attacked.

The DRE training of a police officer is about 240 hours; however, officers are asked to rule out that you are not impaired by a medical condition and are under the influence of a particular drug as part of the evaluation. The DRE officer will ask you questions about your medical background, but the officer has no way to evaluate how that will impact their exam.

In other words, the DRE protocol asks police officers to make judgments that they are not qualified to make. The medical field would not use the DRE protocol to make an evaluation of whether someone is impaired by a drug. The eye exams do not correlate to impairment my drugs according to the medical community; additionally, performance on standard field tests, designed for alcohol, has never been linked to impairment by drugs.

While other States’ Courts have ruled that DRE evidence is scientifically reliable, the Massachusetts Supreme Judicial Court has not addressed the issue. There are many ways to attempts to preclude and limit this evidence from being heard at trial.

Should I hire an expert to help win my OUI drugs charge?

Each case is different and every OUI drugs charge is different. Whether or not you hire an expert will be largely dependent upon the facts of your case and what drug you were allegedly under the influence of when you were arrested. The seriousness of the charge will also play a role; if it is a first offense OUI, you may not want to spend the money on an expert; in contrast, if it is a case alleging death or Serious Bodily Injury, it may be in your best interest to hire an expert.

For example, if you were under the influence of a prescription drug when the officer stopped you, DelSignore Law would strongly suggest that you consider hiring a pharmacology expert. This type of expert is familiar with the chemical nature of drugs, as well as the impact specific drugs have on people both therapeutic and toxic.

Any experts that you hire to help fight your case will work to point out problems with how the DRE protocol differs from the actual scientific method.

Are you facing an OUI drugs charge in Massachusetts?

If you were charged with OUI drugs in Massachusetts, you can call Attorney DelSignore at 781-686-5924 to discuss your arrest and to learn more about the many defenses available to your case.

If you were charged with OUI drugs and have questions, visit our website to read some of the frequently asked questions by our clients.