Typically, most officers will attempt to bring an OUI alcohol charge before an OUI drugs charge because it is easier for the officer to charge operating under the influence of alcohol.

A charge of OUI drugs is difficult for the Commonwealth to prove at trial.

Attorney DelSignore was interviewed by Fox 25 News on OUI drug charges and how these cases are proven in court.

There are four reasons for this:

1. The Commonwealth cannot prove what drug you were under the influence of.

2. Most officers are not trained as a Drug Recognition Expert (DREs).

This means that the officer that arrested you may not have the credentials to form the opinion that you were under the influence of drugs and an OUI drugs case cannot be charged based on subjective information as such.

Field sobriety tests used by officers in OUI drugs arrests were designed to detect impairment by alcohol - not drugs; accordingly, the officer’s investigation is not geared toward detecting an impairment by drugs. Like an OUI alcohol case, an OUI drugs case requires proof that the narcotic drug reduced a motorist’s ability to operate a motor vehicle safely. A recent case in Massachusetts held that field sobriety tests are not scientific tests to detect whether someone is under the influence of marijuana. This same logic would essentially apply to any OUI drug charge where field sobriety tests were relied on by the police officer.

Defendant charged with OUI Drugs after police alleged his car had an odor of Marijuana lingering. The officer subsequently discovered marijuana in the car and the defendant admitted to smoking marijuana. Attorney DelSignore took the case to trial and the client was ultimately found not guilty!

What types of tests do police officers use to detect drug impairment?

In some OUI drugs arrests, an officer will ask motorist to submit to a 12-step test referred to as a DRE evaluation. An officer suspecting a driver is under the influence of drugs may also request a blood or urine test. At trial, an experienced OUI lawyer in Massachusetts can challenge the accuracy and scientific reliability of these tests as part of the defense at trial.

Contact Attorney DelSignore directly at 781-686-5924 to set up a FREE, NO-OBLIGATION consultation about a Massachusetts drug charge.

Attorney DelSignore receiving an award from in Atlanta from the National College of DUI Defense for his work submitted on Commonwealth v. Gerhardt: a major case on OUI marijuana in Massachusetts.

The Commonwealth may rely on a DRE (Drug Recognition Expert) to move their case- learn how to challenge that evidence in Court and why it is not reliable. If the officer in your case is a DRE, it is important to understand the significance of their involvement in your case. For further reading on this topic, we recommend visiting DRE Evaluation In Massachusetts OUI Drugs Charge.

To learn more about driving under the influence of marijuana and other drugs visit our website today for a detailed explanation of the charge and the penalties you may face if found guilty.

In this case, our client was arrested and charged with second offense OUI drugs. The arrest came as a result of the client crashing into an object on the side of the road. Witnesses told police that he was driving erratically, and the arresting officers claimed that he had slurred speech, bloodshot and glassy eyes, and was unsteady on his feet. After a trial, the defendant was found not guilty of both OUI and negligent operation. The Court ordered that his license be reinstated on the three year refusal suspension. Had the client been convicted, at minimum, he would have had an interlock device in his car and a potential 5 year license loss. 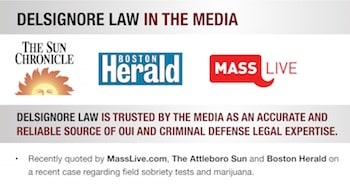