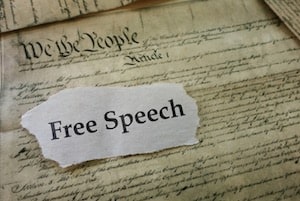 The First Amendment protects freedom of speech, but the right to free speech is not unlimited and speech can be subject to criminal prosecution.

For example, in Massachusetts it is a crime to threaten someone else even though a threat is speech, but it is not protected by the First Amendment because it threatens bodily harm against another person.

Criminal Convictions That may Implicate the 1st Amendment:

However, hate speech may be used as evidence in a criminal case as proof of a hate crime and may, in turn, lengthen the imposed sentence.

However, harassing speech or conduct does not qualify as protected speech. In order for acts to qualify as harassment there must be a pattern of at least three separate events. See Commonwealth v. Welch, 444 Mass. 80 (2005).

3. Threat to Commit a Crime

In order to be convicted of the crime of threats the Commonwealth must prove beyond a reasonable doubt:

Punishment for a threat to commit a crime is up to $100, or imprisonment for not more then 6 months.

However, under G.L. c. 272, § 107(b) it is illegal to non-consensual recording of sexually explicit images or recording of unsuspecting individuals.

5. Encouraging One to Commit Suicide

There have been two high profile cases of coercion of suicide in Massachusetts. However, in Mass. encouraging someone to commit suicide is not a statutory crime.

The first high profile case occurred in 2014 when Conrad Roy, who had demonstrated depressive symptoms, was encouraged to kill himself via text message by his girlfriend, Michelle Carter.

In 2019, a second case occurred at Boston College. Inyoung You is accused of encouraging her boyfriend, Alexander Urtula, to take his own life via text message. Ms. You has also been charged with involuntary manslaughter but has yet to face trial. Ms. You’s lawyers argue that her case is different than that of Ms. Carter as they had text messages showing Ms. You pleaded with Mr. Urtula to stop.

In order to convict Ms. Carter, the prosecution charged her with involuntary manslaughter. In Massachusetts, for secure a conviction of involuntary manslaughter requires a finding that the defendant engaged in wanton and reckless conduct that directly led to the death of the victim. With a prosecutorial approach like this- the defense usually claims freedom of speech under the First Amendment and that words alone without action, cannot legally cause another person to commit suicide. Without a statutorily codified crime for coerced suicide, both the prosecution and the defense are left with little alternatives.

If you have a question about a First Amendment defense to a criminal charge, feel free to contact DelSignore Law by call or text at 781-686-5924.