R. Kelly faces numerous counts of aggravated sexual abuse; it is alleged that the girls were underage at the time of the incident.  In Massachusetts, when someone has sex with an underage person, the crime is referred to as statutory rape.  With a crime like statutory rape, consent is not a defense to the crime.  The only potential defense is to deny that any sexual contact ever occurred.  In Massachusetts, the age for consent is 16 years old.

As matters stand now, R. Kelly made his first court appearance on Saturday, February 23, 2019, and a judge set his bond at $1 million dollars.  He was charged with 10 counts of aggravated criminal sexual abuse and turned himself in to police the Friday prior to his bond hearing.  The charges were based on a grand jury indictment that listed four victims.  Three of the victims were younger than 17 at the time of the alleged abuse, which occurred between May 1998 and January 2010. These charges come amidst a Lifetime documentary which detailed numerous Tsurvivors account of the alleged sexual abuse at the hands of R. Kelly.

Kelly’s conditions of release were similar to what a defendant charged with a similar crime would face in Massachusetts.  He was ordered to have no-contact provision with witnesses, alleged victims, or anyone age 18 or younger.  He also had to turn in his passport. 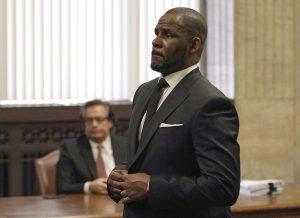 His case on the aggravated criminal sexual abuse charges is proceeding in the Circuit Court of Cook County.  A court hearing was last held Friday, March 22, 2019.  Kelly and his legal team seek production of discovery materials, including alleged sex tapes that prompted the 10 counts of sexual abuse.  The singer also requested permission to travel to Dubai for business.  Friday, the judge took the sex tape issue under advisement, and the travel issue looks uncertain since the Dubai government has spoken out against the travel plans.

Over the past two decades, R. Kelly has been accused of having sex with minors and videotaping many of the alleged sexual encounters. Many of the women who spoke out against Kelly in the Lifetime series commented on his controlling and demanding nature; there were numerous claims that the women were held against their will, starved, and not allowed to use the bathroom. Many of the women also claimed they were not allowed to look at or interact with other men, talk to any of their family and friends, and had their phone numbers changed without their permission.

Many of the accusers tell a similar story; they claim that they were approached by Kelly or a member of his camp while they were at a mall or concert. Many of them were aspiring artists who were smitten with the attention and false hope guaranteed by Kelly. After building a trusting relationship, the women would then slowly be exposed to the demands of Kelly and his “house rules”. Many of the women claim that originally they had trusted Kelly, thought he was a friend, and that ultimately they were manipulated into believing his lies and succumbing to the abuse.  You can learn more about the Lifetime series and the allegations against Kelly on the New York Times website today.

As was the case a decade ago, when he was acquitted of charges, R. Kelly is mounting a vigorous defense to maintain his freedom. Sexual assault cases take time for the defense to investigate.  R. Kelly’s defense team will have to hire investigators to interview potential witnesses and discover potential exculpatory evidence that the State will overlook.  Investigators play a key role in sex crimes as the material the investigator discovers provides the basis of the attorney’s cross examination.

And once again, the accusatorial system of American justice will move slowly and deliberately forward, and R. Kelly’s fate will ultimately rest in the hands of a jury of his peers. R. Kelly has always adamantly denied any wrongdoing and sexual abuse Visit NBC News to learn more about the R. Kelly case.

At DelSignore Law, we have worked with many clients accused of sex crimes and understand the effect it can have on someone’s life.